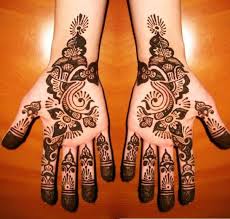 Mehndi or Henna is derived from the Sanskrit word mendhikā. The use of mehndi andturmeric is described in the earliest Hindu Vedic ritual books. Haldi (staining oneself with turmeric paste) as well as mehndi are Vedic customs, intended to be a symbolic representation of the outer and the inner sun. Vedic customs are centered around the idea of “awakening the inner light”. Traditional Indian designs are of representations of the sun on the palm, which, in this context, is intended to represent the hands and feet. 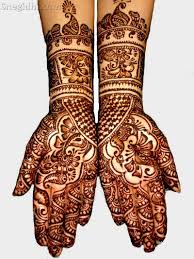 Practiced mainly in India, mehndi also known as henna in the western world is the application of as a temporary form of skin decoration, popularized by Indian cinema and entertainment industry, the people in Nepal, Pakistan, Bangladesh and the Maldives as well as by expatriate communities from those countries also use mehndi. This tradition has spread to exist among some Arab Women particularly the Cooperation Council for the Arab States of the Gulf nationals. Mehndi decorations became fashionable in the West in the late 1990s, where they are sometimes called henna tattoos.

In the modern age and even due to limited supply of Indian Traditional Mehndi artists, usually people buy ready-made Henna cones, which are ready to use and make painting easy. However, in rural areas in India, women grind fresh henna leaves on grinding stones with added oil, which though not as refined as professionally prepared henna cones, achieves much darker colors. 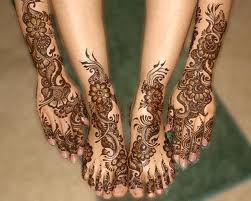